A review with as few spoilers as possible!

I recently had both the pleasure and misfortune to play Rockman CX, a romhack of Mega Man 2. I present my breakdown and analysis of it here.

The premise of the hack sounds fantastic: it’s a classic Mega Man game, except you play with the fantastic controls of Mega Man X, including the ability to dash and dash-jump. There is even the unlockable ability to become able to wall-jump. There are also many other changes as well, such as an upgraded engine featuring multi-directional scrolling, a different set of weapons and a rapid-fire default weapon, and also a host of new stages and bosses, most of which are parodies or throwbacks, such as Whispy Woods or Bomber Man. 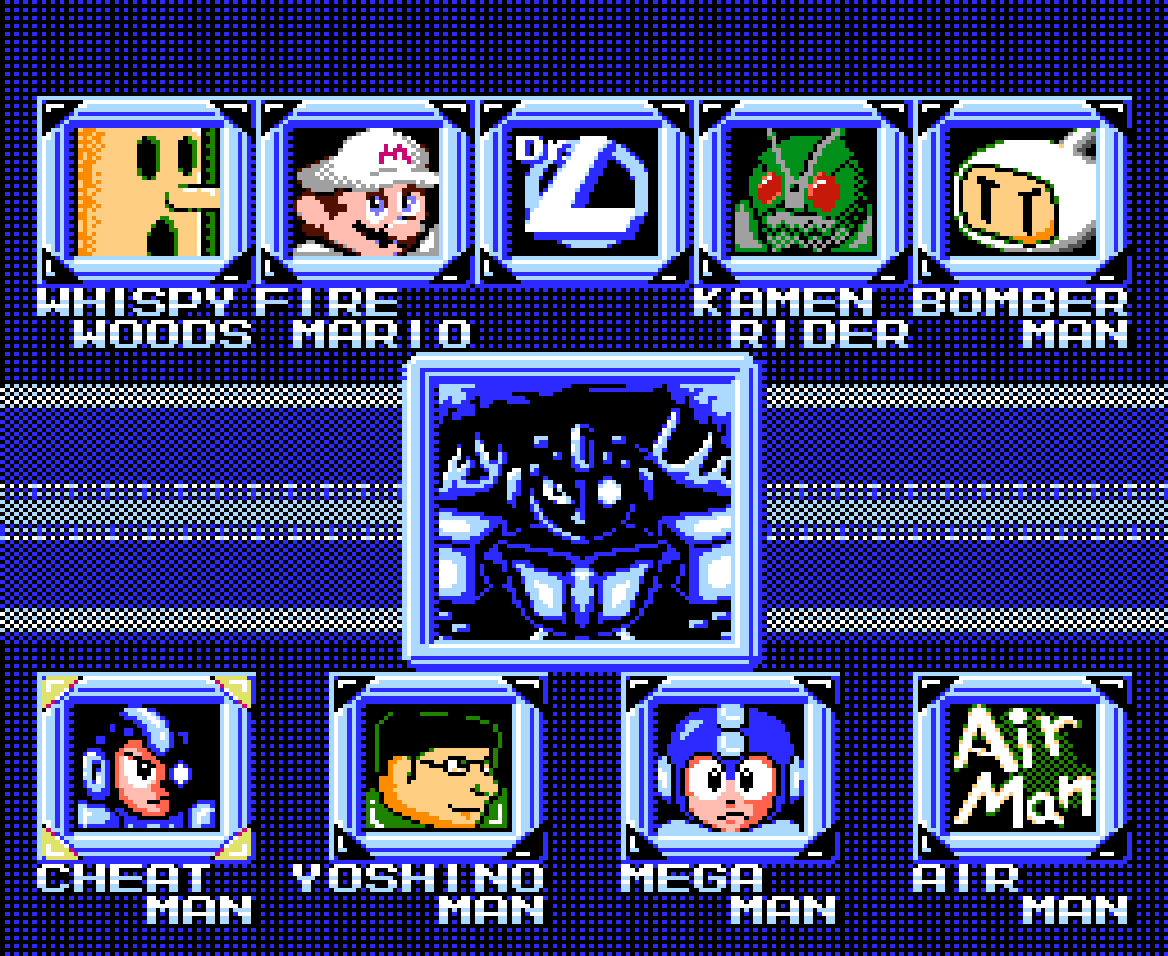 While the gameplay and engine changes were fantastic and were very enjoyable sometimes, the game suffers from frustrating level design that really wrecks its enjoyability. As a result, CX is a mixed bag; sometimes amazing, sometimes terrible.

On paper, adding Mega Man X gameplay to a Mega Man Classic game sounds like a great idea. That’s because it is a great idea. Mega Man X and X2 unquestionably had the best controls of any platformer ever, at least until Super Meat Boy ten years later. The ability of the player to zip around the screen using walls and floors as opportunities to aid mobility rather than obstacles to hinder mobility allowed the player to feel completely in control. No more was there any chance of missing a jump by a pixel and falling into a pit; if X misses a jump, he can just cling to the side of the pit and wall-jump back out.

I have seen argumenst that transplanting the X style of gameplay into a Classic game would be a bad idea because the Classic series is more about thinking carefully about how to advance through a screen than it is about blitzing through quickly. In this model, one might think that giving the player additional, superfluous movement capabilities would only serve to remove the principal challenge. However, I respectfully disagree. At its best, CX was a blast to play, as much as X was. Dashing over giant pits was a ton of fun (after one masters the unintuitive control scheme, at least), and the added mobility really enhanced a lot of sections. The game became much quicker-paced, and a lot of fights that were previously a chore, such as the fire-breathing cats seen in Wood Man’s stage in Mega Man 2, became very enjoyable in CX. The rapid-fire buster was also an interesting change; it allowed the player to not have to worry too much about the precise timing of shots, and worry more about how to position Mega Man in the best place to hit enemies while dodging hazards. 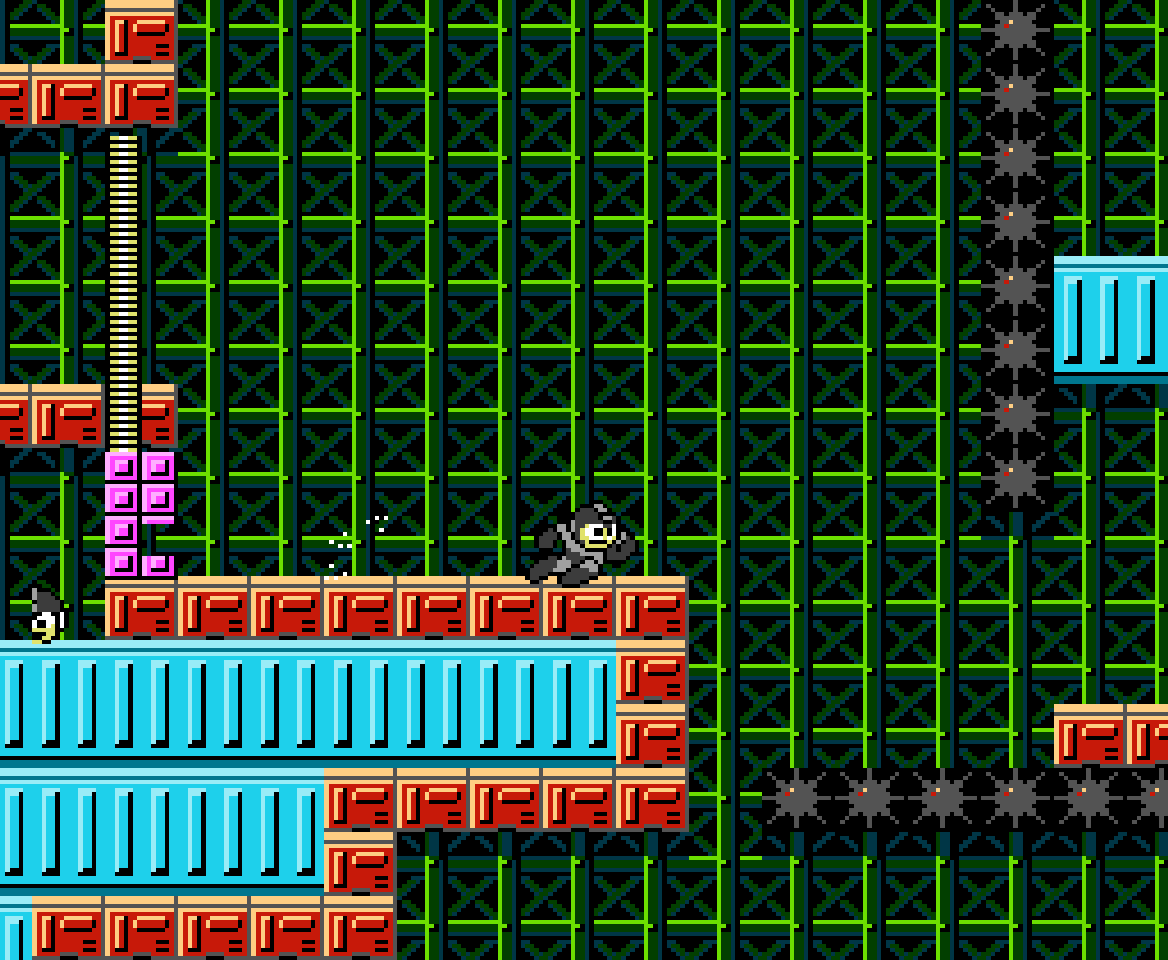 (Pictured: me executing a dash. Notice all the spikes.)

Altogether, I felt that the critical puzzle-solving ability that is required of the player in Mega Man Classic series was preserved well. When I played Rockman CX, I definitely employed the same pattern of advancing through screens, messing up, thinking carefully about how to proceed and what abilities to use to help one get through a tough spot, and then executing my solution carefully the same way I did in the Mega Man Classic games. Giving the player so many additional starting lives (eight per level, instead of two) also helped prevent this pattern from feeling frustrating, as it often did in the Classic series.

Frustrating, however, is exactly what Rockman CX was on the levels that were poorly designed. The designer must have felt that, with all of the player’s new movement capabilities to help them, the only way to pose a fun challenge would be with ridiculously unfair sections filled with instant-death spikes and worse. I’m talking I Wanna Be The Guy levels of nail-biting difficulty here, if not worse. (And I beat IWBTG fair and square I’ll have you know.) In addition to just the standard gamut of spikes, there were instant-kill spike cannons, false floors, Mario “puzzles” that can only be solved by brute-forcing the permutations, screen transitions into spiked walls, and also the instant-kill quick-lasers which were employed to such an absurd extent in two of the stages (Kamen Rider and the third fortress stage) that I had to resort to save states to get through. One screen in particular took a dozen attempts even when I save-stated right before it. The difficulty of these did not generally relate to inventing a clever solution (although the screen that took me a dozen attempts did require a solution that I’m rather proud of, involving the Floor ability); even after determining a way through the maze of lasers, dodging the lasers required nearly pixel-perfect precision at times. These segments perhaps could have been improved with considerably more checkpoints and infinite lives, similar enough to save-states. It was punishing enough that I felt at times that this game was intended to be played tool-assisted, even. 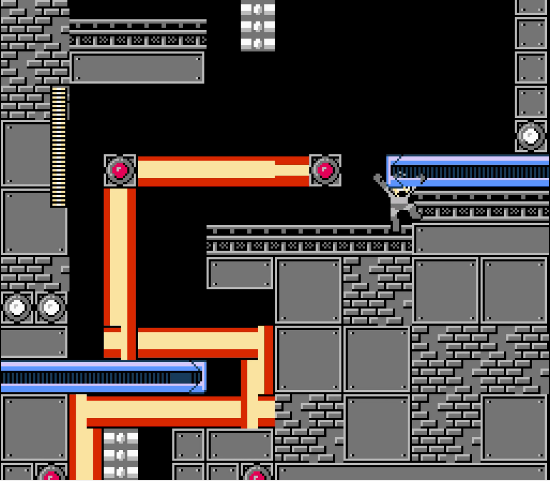 But at the same time there are other stages that were actually fun for me to play through and they still required to think even without having instant-kill spikes thrown at me. Yoshino Man’s stage is probably the rompiest stage (rompiness being a completely cromulent term qualifying the extent to which the stage channels straightforward enemy-based challenges), but it was still very fun to fight familiar and new enemies with the move set available. The Whispy Woods stage even has a few death spikes, but they’re simple enough to pass through if you think carefully. Fortress stages 1 and 4 are very fun. Even the second fortress stage, which initially seemed to me like another horrible pit of death traps, actually is very doable if you think carefully and practice how to properly jump on the falling blocks at the start of the level. Some of the boss fights were even quite good. I enjoyed figuring out how to deal with Kamen Rider’s leap-kick and dodging the apples while firing at Whispy Woods. I laughed out loud several times while fighting Rock Man.

However, one of the bosses in particular showcases the absolute worst that the game has to throw on you. I hate this boss to the core. It is undoubtedly the most unfair boss I have ever beaten (and yes, that includes Dracula and The Guy from IWBTG; these bosses are both difficult, not (entirely) unfair). This boss, I even had to exploit save-states in order to beat him during his first incarnation, since I died more than 40 times against him. I’m talking about Cheat Man. 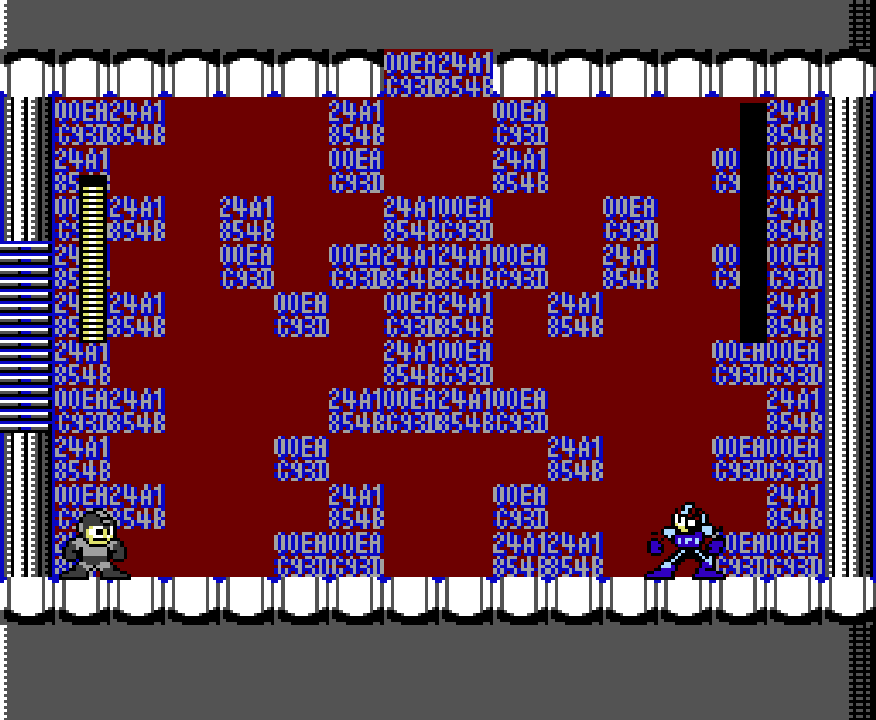 How I loathe Cheat Man.

So, the idea of a boss that “cheats” against you is funny, and could be done well. But since this is Rockman CX, this of course means a ton of instant-kill attacks. He has three instant-kill attacks that I remember off the cuff: his cheat sabre, where he warps behind you and kills you instantly with his sword; his floor-disappearing attack, which is exactly what it sounds like, and isn’t telegraphed in any way; and, sometimes he will fire spikes at you while the screen glitches out. The last one is easy enough to dodge if you use the Floor ability and recognize the telegraph (his health bar turns blue before he does this one). However, it’s the lack of telegraphs, and the fact that his attack pattern is almost completely random, and therefore cannot be memorized, that really makes this fight gruesome. If the attacks were predictable, telegraphed, and not instant-kill, then this fight could actually be good. But they’re not. And trying to hurt Cheat Man? He has no significant weakness except the Mega Buster, he has the ability to teleport you in front of your own shot, causing you to git hit by it (and no, there is no consistent telegraph for this either), and sometimes he will exchange your health bars at random, so you can forget about using an e-tank to heal; he’ll just steal all your hitpoints. During the fight against him in the boss rush, he also uses some literally undodgeable attacks, and using the his own weapon against him – the one-hit-kill Cheat Sabre – causes the game to crash. At least during the boss rush, there is no penalty to dying. During his first encounter, there is no saving grace at all. None.

The other bosses have some flaws too; Fire Mario can stun-lock you permanently, Air Man randomly teleports to places where he cannot be hit, and Rock Man can heal himself to full life, but honestly when I fought them all in the boss rush at the end, even though they were ostensibly more difficult the second time, none of them really posed me a challenge. None except Cheat Man.

However, I will wrap up by reiterating that I did legitimately enjoy this game on the stages that weren’t full of randomized spiky death. The game’s engine was very stable and technically impressive, and the player’s added capabilities were bundles of fun to use. Most of the music was very good, such as the 8-bit version of Storm Eagle’s stage theme from X used in Air Man’s stage (almost all of the songs were 8-bit remixes or ports as far as I could tell). The dialogue was very good, and I commend it for never entirely letting up the illusion that it has a serious storyline and plot, even with the ubiquitous silly references to other video games and the sharp wit. The intro stage to the game really made my jaw drop when some very, very cool events happened, and the fortress stages continue that. 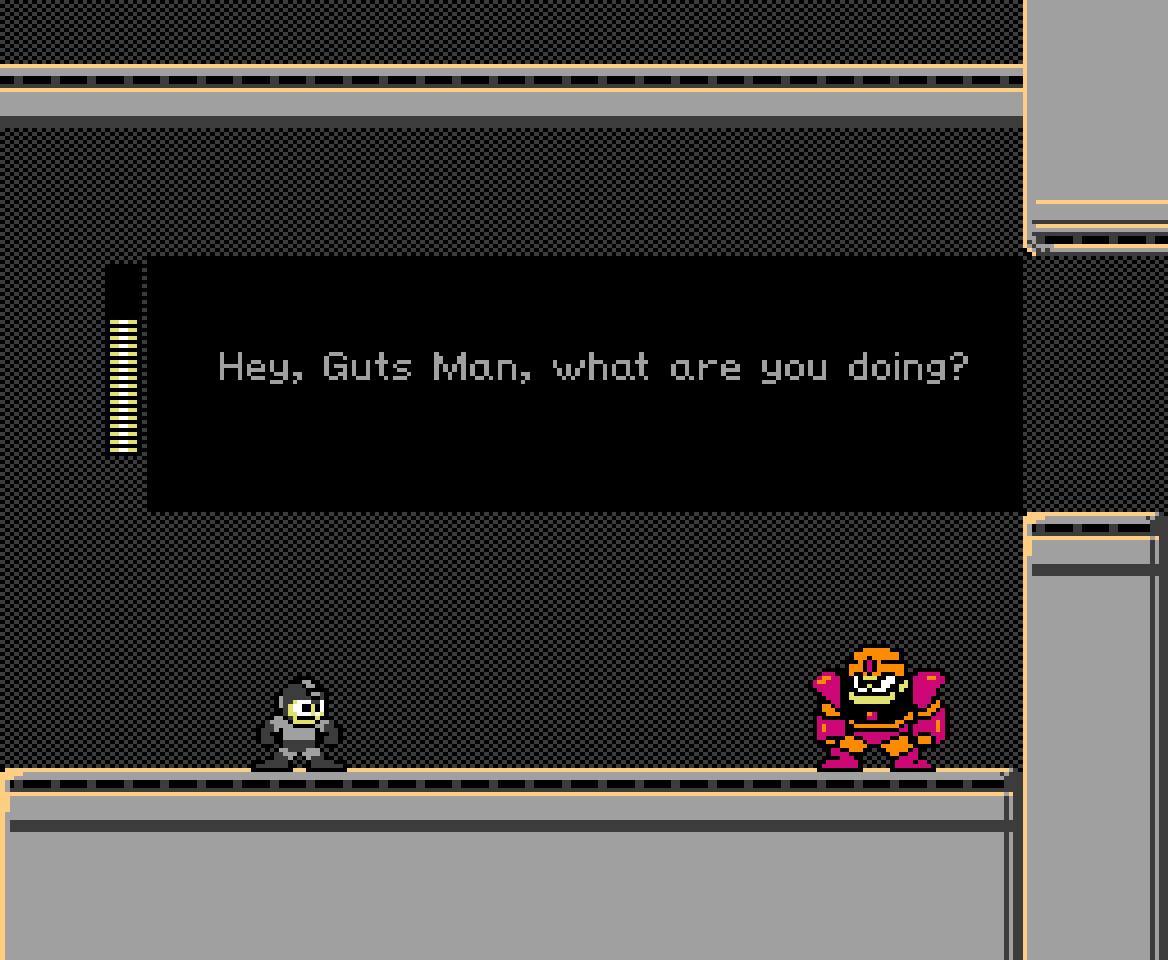 If you feel intrigued at all, I would definitely recommend playing the first level of Rockman CX, or at least watching a video of it – but only if you’re a Mega Man afficianado, of course. After that, I do guarantee that there are more moments in the game that will wow your socks off, but you’ll also have to slog through some of the more frustrating moments I’ve ever seen in a game. If you like, here is my list of levels that are actually good